We can help you with the storage, transport and preservation of lemons and all kinds of citrus fruits. The lemon is a citrus fruit that belongs to the citrus family, its origin and provenance is said to be almost certainly from ancient China. We are talking about a fruit that is widely known worldwide, where its consumption continues to grow continuously due to the horeca, retail and industrial channels.

Origin and varieties of lemons

From Asia to the Middle East, arriving to the peninsula around the 12th century, introduced by the Arabs in the Mediterranean basin. Other research argues that lemons were already among the fruits consumed during the Roman Empire, and some studies have found them on murals in ancient Pompeii.

There are four main varieties of lemon: the Verna and the Primofiori, which are the best known in Spain, the Femminello in Italy, the Lisbon in Portugal and the Eureka in Argentina, among others. Below, we present those considered to be the most commercialised:

Season and harvesting of lemons for longer preservation

The lemon has become a fruit that is no longer in season in Spain, it is available all year round, although it is true that European markets are supplied by other varieties when the Fino and Verna seasons are not sufficiently productive, and varieties such as the Argentinean Eureka penetrate the market very well. Portugal, Italy and Spain are three countries that have produce available all year round.

The fine lemon season is the longest, although it is true that the use of cold storage is very important for the preservation of the lemon during periods of low demand or excess supply.

As far as lemon harvesting in Spain is concerned, there are different post-harvest problems:

In the following, we will explain a series of key measures for the cold storage of lemons.

Storage of lemons for distribution. 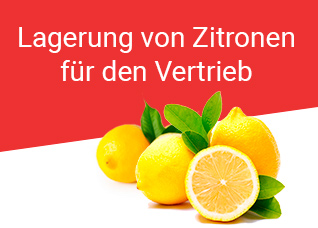 The importance of a logistic warehouse for the preservation of lemons is key. This citrus fruit, one of the most consumed in the world, is very important for all cold storage companies in the Levante area, with the south of Alicante and the Region of Murcia being the main production areas in Spain. With around 1 million tonnes produced, Spain is the seventh country in the world in terms of lemon production. According to the ranking prepared by Statista counting lemon and lime production in 2019.

Countries such as Turkey, South Africa and Argentina have gained weight in the European market, where they are supported by logistical warehouses where they store the lemons in refrigerated goods chambers to extend their useful life, and subsequently, to be distributed at times when Spanish production does not meet demand, for example, during the summer months, when Spanish lemons suffer a month of non-production and do not meet the quality standards demanded by the European market. The province of San Lorenzo de Tucumán in Argentina, with its Eureka lemon, is increasingly penetrating the European market.

Lemon, a perishable foodstuff, requires a storage temperature of between 10 and 12°C, depending on the customer’s requirements, but this can vary. A key element in the good preservation of lemons is to maintain a high relative humidity if the lemon has been harvested in the early ripening process, green. With this humidity the lemon will be able to finish colouring in the chambers. The recommendations for long term storage do not recommend temperatures below 10 degrees Celsius because of the risk of cold damage.

Lemon transport in Spain and the rest of Europe

Lemon is a commodity whose main export destinations tend to be the:

The ideal temperature for the transport of lemons is between 10-12ºC in continuos mode, with a relative humidity between 85-90%. It is true that the lemon is a citrus fruit very similar to the orange, it does not suffer much from temperature changes in the short term, as long as the transport temperature does not drop below 6 celsius degrees. The transport companies in Alicante and Murcia are very focus on the transportation of lemons to international markets. We are companies that are based nearby the product, and we do have the know-how, thanks to our years of experience.

We have seen that temperature controlled storage is key, but this work will mean nothing if we don’t carry out optimum refrigerated transport of goods. Antonio Marco is clear that its logistics in Alicante is more than prepared to carry out this task, thanks to its logistics centre located in Alicante. Antonio Marco is a company that can carry out the following activities: transport, storage and preservation of lemons.

At Antonio Marco we can help you with the transport and storage of lemons with high level of service.