The pomegranate is an infructescence fruit of a tree called pomegranate tree that grows up to five metres high of the Punicaceae family. Its habitat extends from Iran to the Himalayas. It spread through East Asia via tropical Africa; then, it was introduced by settlers in South America and Australia by the fifteenth century. Nowadays, it is widely harvested in the Spanish Levante region, and the predominant variety is the Mollar from Elche.

The season starts in September; the pomegranate warehouse is getting used to working with earlier varieties such as Smith or Mollar Valenciana. The pomegranate season lasts until the end of December, reaching up to January thanks to the storage of pomegranates in cold stores.

Harvesting is done manually and can be brought forward or delayed depending on market opportunities, but this can cause some problems to be alleviated:

The importance of a logistic warehouse for the storage of pomegranate is key. This citrus fruit has become increasingly important for all cold storage companies in the Levante area. Let’s remember that 60-70% of Spanish production usually goes for export markets. Most of the time, the market cannot take all the pomegranates harvested, so growers store them in cold stores; to extend their useful life.
Pomegranate, a perishable fruit, requires a storage temperature between 4 and 6°C for a maximum of 2-3 months. However, there are cases when longer storage is needed; it requires ten degrees to avoid cold damage. At Antonio Marco, we have never applied before this technique.

The optimum relative humidity of 90-95% is another crucial factor for pomegranate storage. Keep in mind that pomegranates are very susceptible to water loss which causes wrinkling of the skin. When storing pomegranates, waxes are very common when they go for an extended storage period, more than two months. In our area, this method is a priority. It reduces water losses, especially in conditions of low relative humidity. Pomegranate can also be cold stored with a plastic coating or lining, which is not a well-known method in Alicante.

The effects of cold storage on pomegranate storage must be watched. The company Antonio Marco is aware that high levels of ethylene in refrigerated foodstuffs can be detrimental, including the storage of pomegranates, causing over-ripening and ageing of the citrus fruit. We consider that during pomegranate storage, exposure to a concentration equal to or greater than one ppm of ethylene stimulates respiration and the rate of ethylene production. Antonio Marco’s location allows him to cover those customers with cold storage needs in Murcia and cold storage in Alicante. 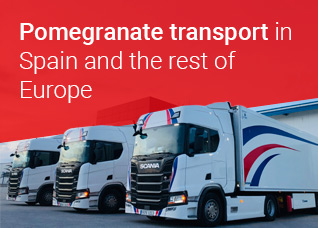 The ideal temperature for the transport of pomegranate is 4ºC continuously. We transport companies in Alicante are highly specialised in these countries because, as we have already said, we are starting our local export campaign and the transport of citrus fruits with pomegranate.
We have seen that temperature-controlled storage is key. Still, this work will mean nothing if we don’t carry out optimum refrigerated transport of goods. Antonio Marco is clear that his Logistics in Alicante is more than prepared to carry out this task, thanks to his logistics centre in Alicante, located in the industrial area La Granadina, Alicante.