Citrus fruit transport in Europe is entering its most intense phase of the year due to the start of varieties such as the Navelina orange and the Nules clementine. In addition to primofiori lemons, grapefruit and pomegranate, which have been fully harvested and are gradually being shipped to European markets.

The most important German media in the fruit and vegetable sector, Fruchthandel (hereafter FH), wanted to report on the transport of these citrus fruits. Our director, Antonio Marco (hereafter AM), talked to the medium belonging to the Fruinet Media International group.

FH: What is Antonio Marco?

AM: Logistics and road transport services company founded in 1966, currently the third generation in the business, myself speaking.

FH: Where are you based? And what kind of services do you offer?

AM: Our headquarters are located in the Industrial area called La Granadina, San Isidro, (Alicante), connected to the A-7 motorway and with direct access from it.

Our main service has always been transportation since our beginnings with my grandfather, later my father in the 2000s introduced refrigerated warehouses and bonded warehouses. Nowadays we offer a full range of logistics services from picking to cross-docking, we can even have a warehouse dedicated to a client with a WMS specifically developed for them. We have become way more complex (laughs)

FH: Which countries do you usually cover?

AM: All of Western Europe including the UK, but excluding Scandinavia. In Eastern Europe we are gaining presence in countries such as Slovakia and the Czech Republic.

FH: How many truck do you have? How is your fleet? What about the sustaible trucks? Do you have any?

AM: Our fleet is composed of more than 100 of our self-owned trucks and about 140 semi-trailers, we rely on partners, currently about 25-30 collaborators. Our vehicles are a maximum of 4 years old and comply with the European Euro 6 emission standards.

For the time being, we have not opted for LNG vehicles, the high investment cost for our international work does not seem to us to be entirely efficient for long distance transportation. In addition to all this, our only supplier Scania has not brought out the most efficient LNG model on the market, they have decided to go for the electric truck, which we will surely see in the next 5 years.

FH: What’s the main difference between Antonio Marco and its competitors? What are your fortresses?

AM: We start from the premise that we sell services, and I won’t give you the cliché of quality, we work hard for it, but it is up to my clients to make a statement.

If I had to sell myself to you, I would say the proximity in the day to day, the years of experience, our hard-work ethic in the sector, and our evolution of services that every day lead us closer to that 3PL company (third-party Logistics) that we want to become one day. 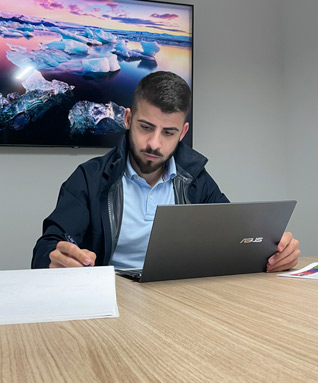 FH: What are the services you offer to the Fruit and Vegetable sector?

AM: We offer everything from transportation from the crop until the final distribution center which our client considers. We also offer temperature-controlled storage, a system for the consolidation of loads of ready-made pallets, and the subsequent distribution with the deliveries that our clients consider.

FH:  The season is already started, volumes start to increase…What are the main needs from citrus exporters from the transportation companies? Anything to remark about their needs?

AM: Citrus fruit requires a high volume of transport services, where the costs for warehouses & exporters who already have relocated plantations along different production areas, and we, the transporters, are an essential asset.

At Antonio Marco we carry out:

– The loading of the product, from the plantations to the warehouse.

– The management of packaging to farms (also called return trips).

– And then its subsequent transport to the European markets.

The transport temperature of the orange can range from 3 to 10 degrees Celsius. Being 8 degrees a very common transport temperature, added to a recommended relative humidity between 85-90%. It must be taken into account when doing groupage transport that citrus fruit is a clear producer of ethylene, being incompatible with some products, we often ignore this.

FH: How do you manage the temperature of the cargo?

AM: At Antonio Marco, temperature control is very simple, but it is true that we transporters are often overconfident and do not do it properly.

First, we prick each pallet to check the temperature, in the warehouses it is often not easy for us due to COVID, due to in many of them they do not allow us to be present at the loading.

This pallet quality control continues along the entire route of the trip, where the driver makes manual notes of the thermograph temperature every 8 hours on average, all of which is checked against the temperature ticket.

Apart from this, the quality and traffic team marks the temperature ranges of the fridge on our FMS, where alarms are generated if the interval setpoint is exceeded.

FH: How much is the lead time for a load from Alicante to Cologne?

AM: First of all we stipulate the driving time, which goes from 23 to 25h, depending on the driver’s mean, but from an average of 82km/h to an average of 76km/h.

There are three possibilities for total transit time from origin point to destination:

*To be notice, without taking into account possible incidents that may arise during the journey: traffic jams, roadblocks, traffic restrictions or breakdowns, among others.

FH:  Be on time, price competetiveness, service level… What is the feature of Antonio Marco your customers value most?

AM: Since the 2000s, the price of transport has fallen sharply, taking into account the CPI and inflation. The entry of new countries into the EU, with the subsequent relocation of certain transport companies to eastern countries, where social costs were obviously much lower. All this, added to the start-up of the world factory, China, which made production costs to fall. Therefore, the most significant cost for has always been the fuel, always subject to OPEC manipulation.

Now we live in a totally different situation, we are beginning to see a much reduced capacity of transport companies to offer competitive prices. Where the quality of service, in which punctuality and the state of delivery of the goods play an essential role, plus establishing a clear flow of information between client and supplier becomes key. This is becoming more and more appreciated by our customers, and I think it is something that should never have ceased to be so.

FH: The trucks unload everywhere in Europe, How do you manage the backloads? What are the most interesting products to cover those backloads?

AM: It is true that in the refrigerated world, the return trips during the winter season suffer a lot, due to the large availability of trucks in countries such as Germany, Austria or the Netherlands, among others. The main import products tend to be processed foodstuffs, from dairy products to pastries, as well as other goods that are palletised and can be loaded onto refrigerated trailers, such as animal feed or empty packaging. When it comes to fresh produce, Spain is highly dependent on the European potato season, especially in the north of France, Belgium, Holland and southern Germany.

Quite the opposite happens in summer with return trips to Spain, when the availability of Spanish vehicles is greatly reduced in Europe, due to the drop in exports of Spanish fresh produce. Our country becomes a clear importer of everything necessary to satisfy the high demand of our large tourist industry.

FH: How do you find the transport sector nowadays?

AM: Not easy moment, a time of change is coming in our industry.

FH: What are the main challenges the transport sector faces in the upcoming years?

AM: In the short term, the supply chain is creating a series of events such as the delayed with the delivery of vehicles for the campaign which is about to start, so transport companies have not yet received many of the units purchased more than 6 months ago. Another issue is diesel prices and the shortage of manpower. Thanks that there has been no major growth in the spanish refrigerated fleet, so the problem is not getting any worse.

In the mid-term, we have the sustainability of fleets, the increase in taxes on fossil fuel fleets, the costs of road taxes, and labour. I consider this last point to be short term, because if we do not act now, we could already see situations like those experienced today in the United Kingdom, where they have had to use the army to refill back their petrol stations, although it is true that Brexit has a lot to do with this, but that would be enough for another interview (laughs).

In the long term, I would point to the elimination of fossil fuels, the remote driver from home and finally the driverless truck.

(We could go on all day discussing which are the main challenges we face as an industry… true that there are many unmentioned, lets leave something to talk for the next one. Thanks for the interview).

Fruits and Vegetables: Storage, Transport and Preservation
Intermodal freight transport & its roots
Antonio Marco was in Fruit Attraction 2021
Pomegranate: storage and transport
Let's rephrase coworking & teamwork at AM
Transport companies on the edge